Feeling dizziness when we using a monitor privacy screen?

The monitor privacy screen, also called the privacy filter, uses the ultra-fine louver physical polarization principle, so that only the front user can see the screen content, and the onlookers on both sides can only see the dark screen. Because the quality of the anti-peeping film on the market is uneven, there are many bad businesses shoddy, so many consumers face a real problem: the anti-peep film looks at the dizziness. 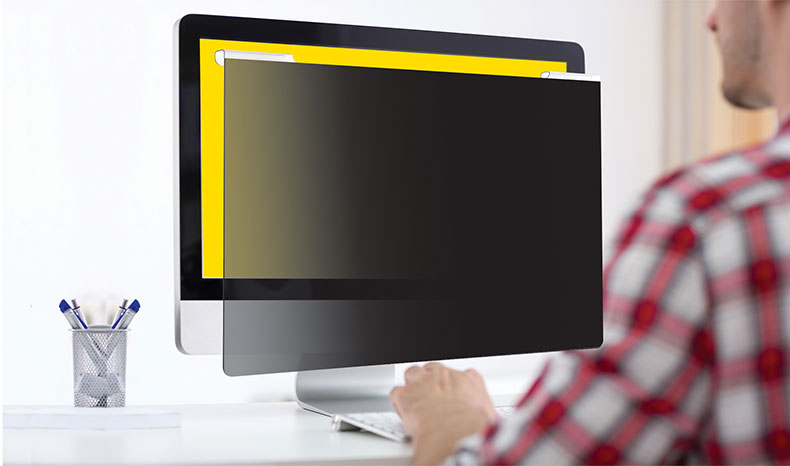 Here Xiaobian can be responsible for a sentence: the authentic high-quality monitor privacy screen not only does not hurt the eyes, but also protects the eyes to a certain extent, there is no phenomenon of looking at the dizziness after the anti-peeping film is attached.

Formal monitor privacy screen It is composed of five layers: PET layer, adhesive layer, ultra-fine louver, PC layer, anti-glare hard coating. The anti-glare hard coating on the surface adopts KBC wear-resistant technology, which not only has the effect of anti-fall and anti-scratch, but also anti-glare, anti-ultraviolet, anti-blue, anti-radiation and other functions.

So, why we will feeling dizziness when we using a monitor privacy screen ?

1. This can happen with anti-peeping films made from inferior anti-peep substrates.

2. In order to save material, many merchants are reluctant to set the angle of the anti-peep film to make it appear streak.

3. Staring at the screen for a long time, especially when used outdoors, regardless of whether or not there is an anti-peeping film, eyes will appear dizziness, eye fatigue and other symptoms.

4. When the anti-peeping film is attached, bubbles appear, and dust, air and other impurities are introduced into the screen, which will affect the clarity of the screen, resulting in dizziness and the like.

Shenzhen YIPI Electronic Limited, a manufacturer specializing in the research, development, production and sales of monitor privacy screen, all the monitor privacy screen substrates are made of pure Japanese imported materials, and strictly control the quality. In the past 10 years, the company has passed various international certifications such as SGS, ISO, BSCI, CE, Rohs and Reach. Welcome to call our hotline 13433007870!